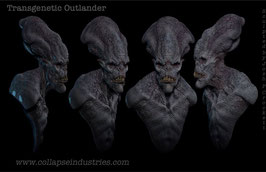 After the economic crash of the of the Second Soviet empire in 2079 massive reactor falls occurred. Twenty years later most of the Soviet empire remained a barren snow covered wasteland. As the powers who survived the massive environmental shifts began to look at the former empire with fear and an interest of what could be salvaged. The first recognizance teams report that not everyone was dead. This is contrary to contemporary repots that said 99% of the population had died. However the "survivors" descendants were horribly mutilated and deformed. Now the question remains whats still out there?

Its 10in tall and comes with the base. It is one rotocast torso/head and a solid base.  Available in both grey and semi-translucent flesh.

Collapse Industries is the brainchild of a resin caster who became bored buying the same old figures. Our goal here is to create new concepts and original art and translate it to 3d format. We work with top artist to create unique and inspiring figures. Check out our products section for Killer castings!