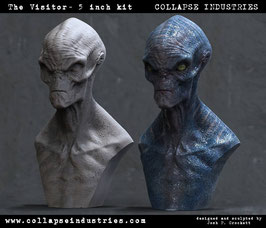 We have all heard of Area51! We all know the truth is out there! Collapse Industries has found out the truth and now we introduce you to the Visitor. This is the story as we heard it. In 1947 there was the capture of an Alien mapping team. The "Aliens" were comprised of two sub species. Only one alien survived the crash long enough to send an SOS beacon, before capture we don't know what happened to  this interloper after capture. The government is still silent to the facts until the Visitor arrived in 2020. Are they finally going to admit to extraterrestrial life with this advanced species arriving to retrieve the sensitive information they lost in the crash? What does this mean to us?

The visitor is in production and will be available as a 5in kit . The kit will be a solid cast offered in traditional solid gray resin or a semi translucent flesh tone.

Collapse Industries is the brainchild of a resin caster who became bored buying the same old figures. Our goal here is to create new concepts and original art and translate it to 3d format. We work with top artist to create unique and inspiring figures. Check out our products section for Killer castings!